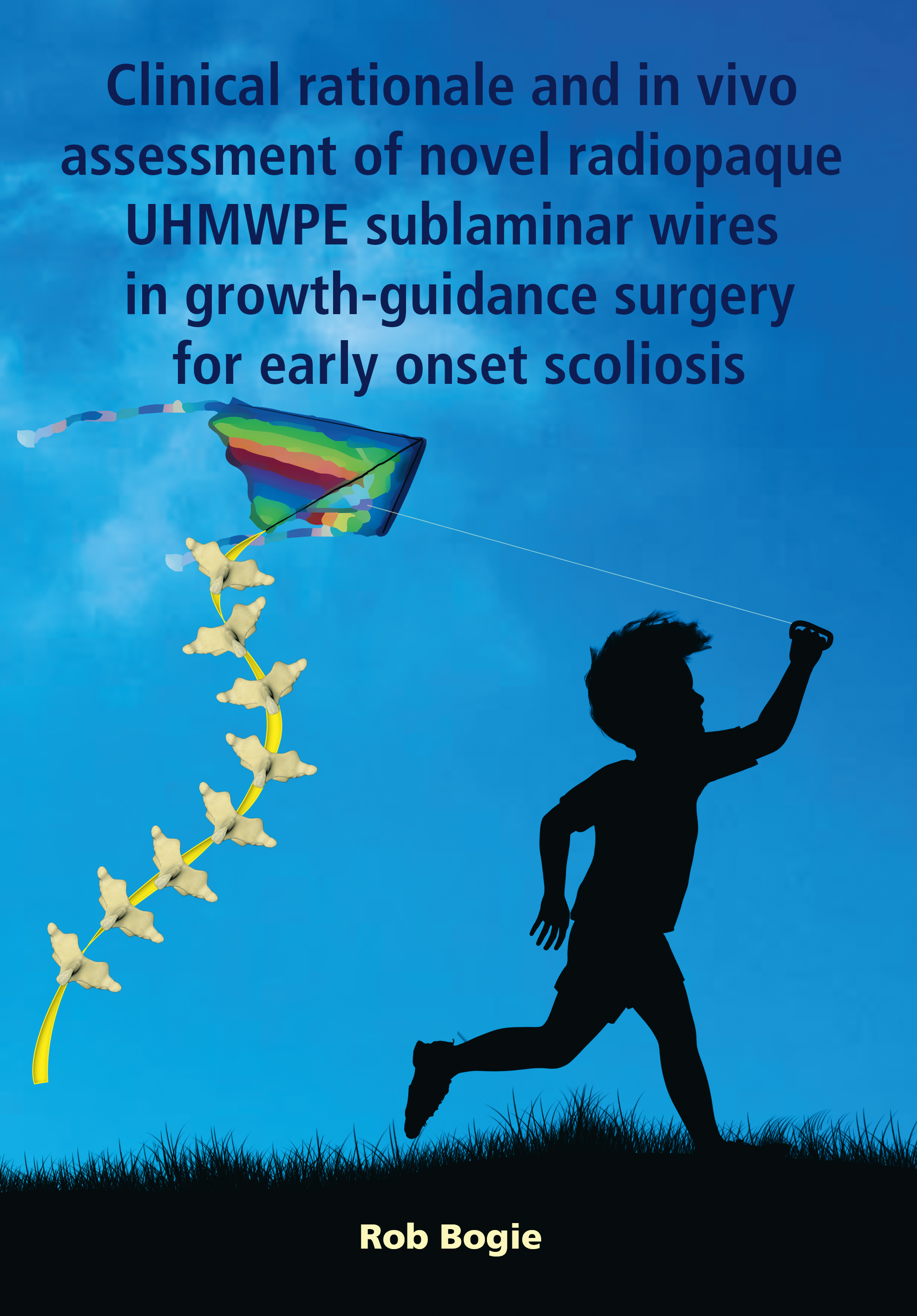 The treatment of early onset scoliosis (EOS) should focus not solely on the correction of the spinal curvature, but also on the preservation of growth with subsequent pulmonary development. In the past, growth-guidance systems with the use of metal sublaminar wiring have shown high rates of instrument failure and subsequent loss of curve correction. This has led to discontinuation of most of these instrumentations. Recent implantation of a modern Luque trolley with Titanium wires was proven successful in EOS patients with minor curvatures. In patients with larger curvatures, abrasion of the titanium wires against the rods caused severe metallosis and the instrumentation failed in these cases, which necessitated revision surgery.

The focus of this thesis was to develop an EOS growth-guided trolley system with the implementation of novel ultra-high molecular weight polyethylene (UHMWPE) sublaminar wires. The wires allow for gradual translation of the curvature to precontoured rods and they function as sliding anchors to facilitate spinal growth. We hypothesized that this concept of growth-guidance instrumentation could offer several advantages. First, the high fatigue strength of these woven UHMWPE wires will reduce the risk of instrument failure. Second, a decreased sliding friction is to be expected with the use of UHMWPE wires and generation of metal wear particles is prevented. Finally, by providing radiopacity to the UHMWPE wires (using a Bismuth trioxide additive), instrumentation integrity of the anchoring can be followed radiologically.

In vivo analysis of UHMWPE sublaminar wires as part of a growth-guidance technique was performed in a sheep model. Wire integrity was maintained during the follow-up period without restricting spinal growth and no neurological injuries occurred. High-resolution peripheral computed tomography (HR-pQCT) revealed heterotopic bone formation, which did not affect spinal growth. Histological evaluation showed that the wires did not cause adverse local tissue response. Limited amounts of bismuth oxide were released through leaching, which was well below the established tolerable intake.

The final step in this preclinical evaluation is to develop a large animal scoliosis model to test the proposed growth-guidance construct. After performing a literature overview of experimental scoliosis models, a porcine scoliosis model with a standalone posterior spinal tether was developed without performing rib procedures. A structural scoliotic curve was created in eight out of fourteen animals, and the deformities showed sufficient persistence after tether release. Sagittal profiles showed the development of a lordotic curve at the anchor sites due to anterior overgrowth. The created curves were inconsistent and the rapid porcine growth rate played a dominant role in the occurrence of instrumentation failure. This model requires further work and validation prior to adoption, preferably in an animal model with slower growth rate.

As a result of superior mechanical properties, UHMWPE sublaminar wires can reduce the risk of instrument failure as part of a growth-guidance system in the treatment of EOS. The radiopaque wires were proven biocompatible, the decreased sliding friction can facilitate spinal growth and generation of metal wear particles is prevented. In this manner, the number of revision surgeries can be decreased. The final concept of this new growth-guided trolley concept will depend on future research including a careful stepwise clinical introduction of the wires.